Meet the principal characters of the “In Time” Saga

Except for a few well documented historical figures, the “In Time” characters are purely fictional, however, my readers tell me that they feel so real they almost become family and friends — and a few of them enemies, especially Meadowlark and the Coyotes’ Snake and Crow tribes.

NOTE: The photos on this page were gathered from various Internet sites. I selected them to honour our Ancestors and their way of life, their culture and their language. Because we don’t know who the authors of the pictures are we are unable to secure permission, but if you are the owner of any of these pictures, please feel free to advise us if you would like for it to be removed. Email: kdbeckett@live.ca

Thank you to all those who have contributed to this page.

A Métis Search & Rescue expert, Lee Ann Grayhawk is a strong willed woman who was never quite ‘in sync’ with her world. At 5’ 7”, she’s a tall beautiful woman with delicate features, chestnut hair with sun-kissed streaks, and hazel eyes that have a dark rim when she is angry. At twenty-six, she is a highly respected professional in the Search and Rescue field for her ability to “zone in” on missing victims. She is also a highly skilled canoeist, horseback rider, and a World champion in barrel racing and pole bending amateur competitions. Lee Ann has a big heart and is well known for donating the proceeds from those competitions to children charities and organizations helping people with disabilities. She is stubborn and has few fears as a result of her training in Taekwondo and Tai Chi Chuan. Skills she will rely on the day she meets her match!

She despises cooking and avoids it at all cost! She cannot tolerate being inside walls for very long and sleeps mostly in tents in the summer, despite having a camper trailer at her disposal during her missions around the world. She lived a difficult life at the hands of her mother and does not trusts people easily, especially strangers. Although a strong woman, she has weaknesses that she cannot overcome without help: betrayal and losing loved ones.
Lee Ann strongly believes in the Great Spirits and Destiny, but she does not believe in the supernatural. A belief she will have to revisit when her ancestral Shamans transcend her from the 21st Century into 1793’s Athabasca. She rides her Appaloosa through a shimmering rainbow, and finds more than she bargained for: Michael Lee Blackwell – the man she was partly named after. As a member of his canoe brigade, she will face unimaginable perils, fight for her life…and for her heart on their journey from Athabasca to Grand Portage for the North West Company’s 1793 Rendezvous.

A Blackfoot-Scot Métis, Michael Lee Blackwell was raised by his Siksika relatives following his parents’ murder in the 1770s. At 6’ 2”, Michael is a big man with dark skin, black eyes and black hair with a few red streaks, a legacy from his Scottish ancestors. The son of Scottish Lord William Liam Blackwell and his Siksika wife, Apawawakosow (White Antelope), Michael has an inflexible sense of justice and honour. He is fearless and meets challenges head on. After serving as War Chief of the Wolf tribe, under Siksika Chief Thundercloud, he decided to enter the fur trade business as an independent trader. “If it’s good for the white man, it should be better for us,” he told his people. He forms an alliance with the North West Company (NWC) who tolerates him because they want him as partner, but he refuses to deal with the British Hudson Bay Company due to their unfair treatments of the Indians.* His dislike of the HBC stems from the wars between Scotland and England, which has decimated the Blackwell clan on the Highlands. As the sole rightful heir, Michael was expected to claim the Blackwell title and estate on the Highlands, but he refused to do so, unwilling to give up a life of freedom in the Canadian Northwest, the only life he knew. He is happy to let his uncles live in the castle and manage the estate while he roams the plains and mountains freely.

A Gemini, he strongly believes in the Great Spirit and destiny, and accepts the supernatural as a normal occurrence, as do his Blackfoot people. At the age of thirty-two, he has managed to avoid the marriage trap. He knows that the woman destined for him is out there, and he is willing to wait because he’s the kind of man who marries only once – for life. When he meets a Métis woman of his people’s blood; Lee Ann Grayhawk, (Wandering Spirit), he knows instantly that she is the woman who was destined to him. They are two halves of one life force, and he knows that they will spend the rest of their life together. He knows that he will love that woman intensely and that together, they will raise the large family they both always wanted. His challenge will be to convince her to set her doubts aside and let herself love him.

Michael’s tattoos
By the end of his life, Michael will have many markings, but the most important one is the band made up of Celtic knots around his massive left upper arm, which was the same band that adorned his father and all his Scottish ancestors’ arms. His warrior band however has a few additional elements of his Siksika tribe: a timber wolf, his Spirit Name and Totem, and several black lines that hold a very special meaning in Blackfoot culture. His other tattoos are a hawk in flight above his heart to honour his warrior wife, his war shield on his right arm following the bloody war with the Coyote Nation, and a tribal tattoo covering his upper back. 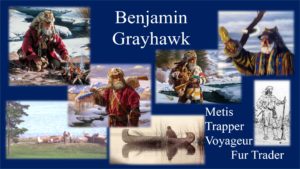 Authors are not supposed to favour one character but Benjamin Grayhawk has a very special place in my heart. He is a life-loving old man whom, in his mid-eighties, barely slows down long enough to catch his breath. A Blackfoot-Scot Métis, Ben lost his parents in the mid 1700s in the Northwest during an Indian raid. He was rescued from slavery by the Lake Superior Ojibwa, who raised him as their own. He is a very strong man who was the best paddler in his fur trade brigade, and later an exceptional horseback rider.
His sheer strength often got him in trouble, but also ensured his survival in a very rough 18th century world. He and his buddy Julien Montour paddled the rivers from Trois-Rivieres to the Northwesst, from Michigan to Mississippi, always in search of adventure. A retired Voyageur and wood runner, then an independent fur trader, he is Michael Blackwell’s business partner. They were under attack when Ben was catapulted into 20th century Ontario at a time when being Indian or Half-Breed caused discrimination and injustices.

Clermont Duval, a world renown Mattawa artist and great friend, created a painting of a trapper who looks exactly how I had envisioned Ben. With his permission, a photo of that painting is included on this page. 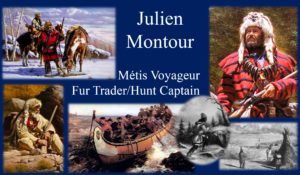 Julien Montour is a French-Algonquin Métis, born and raised in Trois-Rivières, Quebec, in the mid 1700s. He is a direct descendant of Pierre Couc-Lafleur and Marie Miteouamigoukoue. Born of a strong line of explorers, interpreters, and fur traders, life in a canoe throughout the Americas is all Julien has ever known. Wood Running is in his blood and he became Ben Grayhawk’s blood brother when they were both young intrepid Voyageurs and Coureurs des Bois.
Julien is a very handsome man with long brown hair, a beard, and striking blue eyes that seem to see right through people. He is a gifted natural healer with a strong sixth sense who speaks many White and Indian languages. His sense of humour and joie de vivre makes him a person everyone seeks and feel privileged to call a friend.
He becomes an independent trader in Canada’s North West, where he eventually meets Michael Lee Blackwell, a fellow Scot-Blackfoot Métis and independent fur trader. Widowed in the early 1790s, Julien leaves his seven children with his late Indian wife’s family, near Fort Chipewyan, while he secures their future – and a new wife, before joining Micheal and Lee Ann’s tribe. 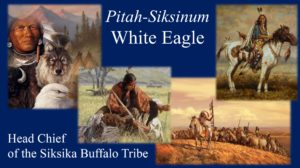 Head Chief of the Siksika Buffalo tribe, Pitah-Siksinum (White Eagle) is a strong leader his people highly respect. He is a tall, handsome man, with black hair and black eyes, who carries himself regally. His family has been the keeper of the sacred Beaver Medicine Bundle for many generations, and White Eagle honours his commitment to his people by leading an exemplary life.
He still mourns his wife and unborn son, ruthlessly murdered by the Coyote, when he meets Michael in battle. The two strike an alliance and will become blood brothers. They will fight the enemy together and make alliances with other Blackfoot and allied tribes to defeat the invasion of their territory.
Like Michael, White Eagle is a man of strict integrity with no tolerance for invaders who bring disease and destruction to his world. Together, they will wage a war on the tribes of their lifelong enemy, the Coyote Nation, the Hudson Bay Company, the whiskey traders, and the trappers. Their alliance will remain with the North West Company, as long as it refrains from peddling liquor on Blackfoot territory.
His son, Sakoye Aotan (Heavy Shield) and Michael’s son Benjamin Máóhk Ayinnimaa (Red Hawk) will become blood brothers and Shamans. 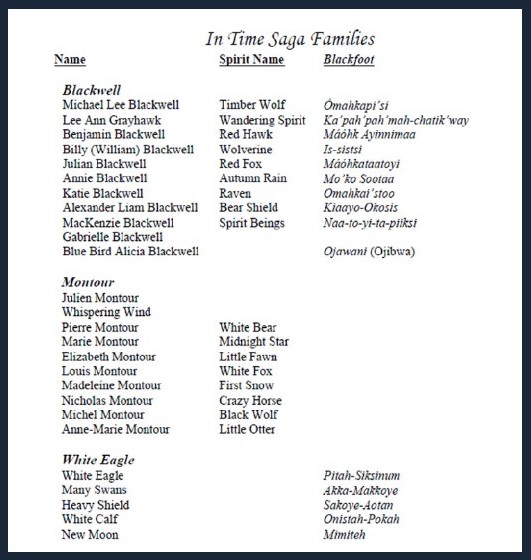 Rainbows in the Mists raise Tides and carve Paths, as Secrets unravel a Legacy into the End of Time.