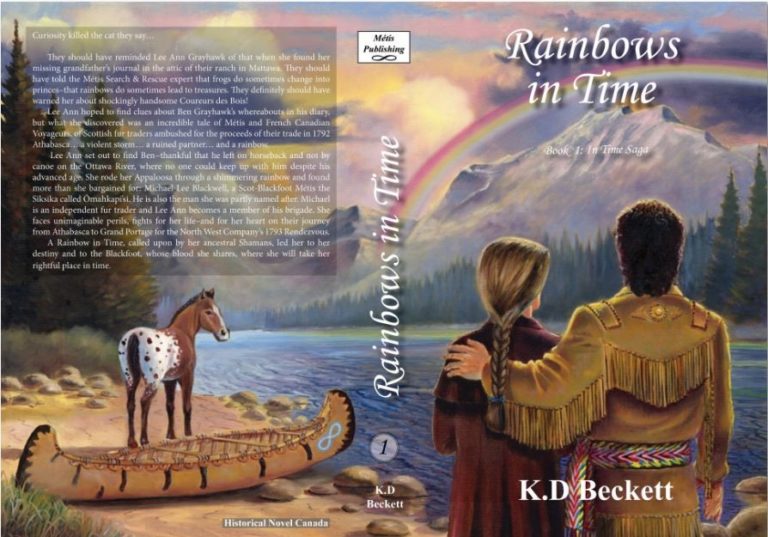 Curiosity killed the cat, they say…

They should remind Lee Ann Grayhawk of that when she searches for her missing grandfather’s journal in the attic of their ranch in Mattawa.
They should tell the Métis Search & Rescue expert that frogs do sometimes change into princes – that rainbows do sometimes lead to treasures.
They definitely should warn her about shockingly handsome Coureurs des Bois!
Lee Ann hopes to find clues about Ben Grayhawk’s whereabouts in his diaries, but what she discovers is an incredible tale of Métis and French-Canadian Voyageurs, of Scottish fur traders ambushed for the proceeds of their trade in 1792 Athabasca… a violent storm… a ruined partner… and a rainbow.
She sets out to find Ben – thankful that he left on horseback and not by canoe on the Ottawa River, where no one could keep up with him despite his advanced age. She rides her Appaloosa through a shimmering rainbow and finds more than she bargained for:
Michael Lee Blackwell, a Scot-Blackfoot Métis the Siksika called Ómahkapi’si, (Timber Wolf), the man she was partly named after!
Michael is an independent fur trader whose brigade Lee Ann joins and faces unimaginable perils, fights for her life – and for her heart on their journey from Athabasca to Grand Portage for the North West Company’s 1793 Rendezvous.
A Rainbow in Time, called upon by her ancestral Shamans, leads her to her destiny among the Blackfoot, whose blood she shares, with whom she will take her rightful place In Time.