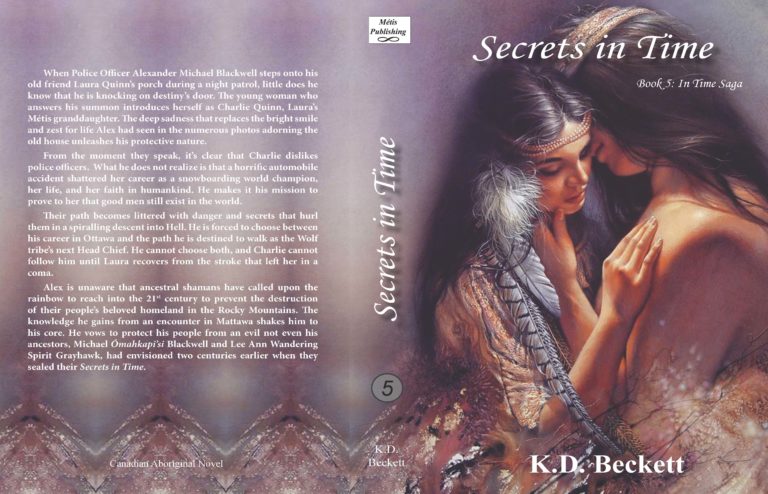 When motorcycling Police Officer Alexander Michael Blackwell steps onto his old friend Laura Quinn’s porch during a night patrol, little does he know that he is knocking on destiny’s door. The young woman who answers his summon introduces herself as Charlie Quinn, Laura’s Métis granddaughter.

The deep sadness that replaces the bright smile and zest for life Alex had seen in the numerous photos adorning the old house unleashes his protective nature. From the moment they speak, it’s clear that Charlie dislikes police officers. What he does not realize is that a horrific automobile accident shattered her career as a snowboarding world champion, her life, and her faith in humankind. He makes it his mission to prove to her that good men still exist in the world.

Their path becomes littered with danger and secrets that hurl them in a spiralling descent into Hell. He is forced to choose between his career in Ottawa and the path he is destined to walk as   the Wolf tribe’s next Head Chief. He cannot choose both, and Charlie cannot follow him until Laura recovers from the stroke that left her in a coma.

Alex is unaware that ancestral shamans have called upon the rainbow to reach into the 21st Century to prevent the destruction of their people’s beloved homeland in the Rocky Mountains. The knowledge he gains from an encounter in Mattawa shakes him to his core. He vows to protect his people from an evil not even his ancestors, Michael Ómahkapi’si Blackwell and Lee Ann Wandering Spirit Grayhawk, had envisioned two centuries earlier when they sealed their Secrets in Time.