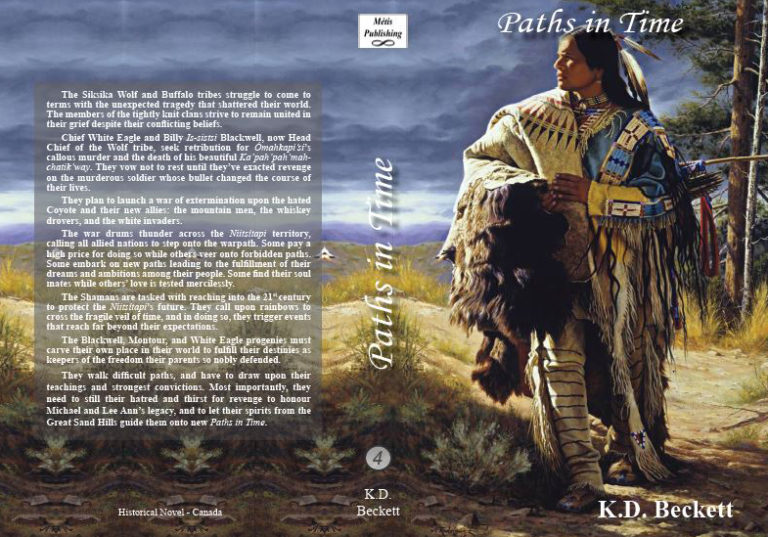 The Siksika Wolf and Buffalo must come to terms with the unexpected tragedy that shattered their world. The members of the tightly knit clans strive to remain united in their grief despite their conflicting beliefs.

Chief White Eagle and Billy Is-sistsi Blackwell, now Head Chief of the Wolf tribe, seek revenge.  They plan to launch a war of extermination upon the hated Coyote and their new allies: the mountain men, the whiskey drovers, and the white invaders.

The war drums thunder across the Niitsitapi territory, calling all allied nations to step onto the warpath. Some pay a high price for doing so while others veer onto forbidden paths. Some embark on new paths leading to the fulfillment of their dreams and ambitions among their people. Some find their soul mates while others’ love is tested mercilessly.

The Shamans are tasked with reaching into the 21st century to protect the Niitsitapi ‘s future. They call upon the rainbows to cross the fragile veil of time, and in doing so, they trigger events that reach far beyond their expectations. The Blackwell, Montour, and White Eagle progenies must carve their own place in their world to fulfill their destinies as keepers of the freedom their parents so nobly defended. They walk difficult paths, and have to draw upon their teachings and strongest convictions.

Most importantly, they need to still their hatred and thirst for revenge to honour Michael and Lee Ann’s legacy, and to let their spirits from the Great Sand Hills guide them onto new Paths in Time.